You've never heard of this chemical attack. Why? It has all the hallmarks of the Ghouta chemical attack that happened in August the same year and was blamed on Assad by the western media. Yet it's far, far harder to pin this attack on Assad as it hit a government-held area and even killed at least 16 Syrian government troops.

I am 95% certain that the rebels committed this attack and that this at the very least sets a precedent that they have access to and a willingness to use chemical weapons. Therefore it is not a stretch to go from there and make the conclusion that they most likely committed the Ghouta chemical attack and the later one in 2017. 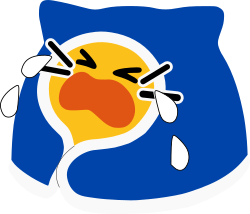 Zara ⥀ Vivernu
@fluffy Well I suppose I am technically a "Trump supporter" but more out of pragmatism and not because I idolize the guy. I voted for him in 2016 and I voted for him this month. He tends to act like an egotistical buffoon and says retarded shit but I hate the Democrats' current social zeitgeist and more generally I hate neocons. On the other hand I don't like the Republicans' more capitalist leanings.

touch fluffy tail fluffy@social.handholding.io
@Vivernu how can you support someone who is complicit in the murder of minorities and an open white supremacist... Don't you see what he's done to the country?

Zara ⥀ Vivernu
@fluffy Okay so if you think Trump is ideologically a white supremacist or a wignat or w/e as opposed to just an incoherent populist who constantly contradicts himself you're delusional.

☠ National Corporatist Lain_OS ᛇ 🇺🇸 lain_os@yggdrasil.social
@Vivernu @fluffy I say "I think he's being sarcastic" because he told me that I sound cool. He follows three of the four active accounts on this instance, and he follows my old account on https://freesoftwareextremist.com 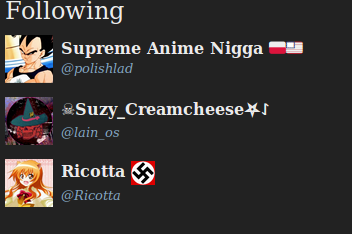 @Vivernu regardless of what he is himself, he’s emboldened elements in the country that have led to a rise in this. When before Trump was there a charlottesville? Where before Trump were the proud boys?

He may be a fool and a bumbling idiot but there’s no hiding whose cause he champions. Is that really the side you want to be on?

@lain_os @Vivernu You are probably going to have a hard time putting one of your pre-fabbed labels on me. If you want to engage in that sort of thing, at least have the courtesy to untag me.

Zara ⥀ Vivernu
@fluffy I'm not really inherently opposed to elements and tendencies within the "Alt-Right" that said I have disagreements with aspects and don't support everything. A lot of the behavior and "memes" are cringe. Most of their criticisms of modern western society are however 100% on point.

Honestly though, I don't oppose "white nationalism" at all. It is the natural organic social state of European-descended peoples and therefore I firmly oppose suppressing it. I oppose the more violent, unreasonable tendencies however. Regardless I'd be philosophically inconsistent to oppose white nationalism.